Around 1500, Ladder 65 was dispatched to cover Company 82 while they operated on a working fire on the 700 block of Highland Ave. Ladder 65 with 65-9b (Moore III) made a response with a crew of 6 and the command vehicle made a response with 65-9(O’Rourke Sr.) and 65-9a (Hopkins). While enroute to cover Station 82, Chester’s Battalion Chief ordered Ladder 65 to come directly to the scene. Upon arrival, crews threw ladders to the Bravo and Charlie sides of the building and also prepped for ventilation if it was needed. The fire was placed under control shortly after and Company 65 was released after an hour. 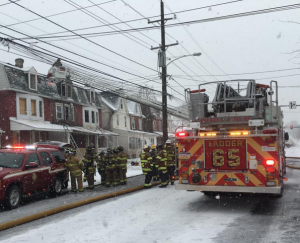